Lea Brückner was born in 1997 to German-Czech parents. At the age of 7 she started to play the violin. In her early years, she received lessons in the S-Class, abursary at the Folkwang Music School in Essen.

Early on she took part in competitions such as „Jugend Musiziert“ and won prizes up to the federal level. She participated in master classes with Detlef Hahn, Boris Garlitzky, Tanja Becker-Bender, Erik Schumann and Julia Fischer among others. Regular contact to Prof. Bohuslav Matousek in her motherland at the Prague Music Academy also promoted her musical development.

As a soloist she has performed with the New Symphony Orchestra Berlin, at the international music days in Hessen, at the Rhein Ruhr Festival Essen, for the Beethoven Society in Bonn, Echo-prize winner Jozsef Lendvay and the famous singer Kathy Kelly.

Establishing a connection with her audience is very important to her, so she moderates all of her concerts herself. Lea Brückner also has experiences in the studio.  In 2021 the WDR-Television made a report about her, presenting her resent online project „Music for our planet“. Professional musicians like the Stuttgarter Philharmonics, the Berlin State Opera or the violin virtuose Yury Revich took part.

An notable characteristic of the young violinist is her innovation to support social projects or even to develop new ones. So she developed the concert series „Children make music for children“, as well as playing for the animal rights activist Ralf Seeger and his team (known from VOX in german TV)and instigated a concert that financed 30 refugees with a half-year German course at the international federal government. She organised a further concert that gave children and adolescents in cooperation with the youth welfare office the opportunity to take part in two art courses to give them a taste of the local culture.

She has evendived into the region of pop music, playing at the Helene-Fischer Christmas Show on ZDF from 2016 to 2018.

Her current project is the online initiative „Music for our planet“, founded in 2021, with which she, together with other musicians, draws attention to climate change and wants to get the music industry to rethink towards sustainability. So far, the Stuttgart Philharmonic, the Beethoven Orchestra Bonn and the star violinist Yury Revich have taken part.

In 2022 she has been invited as a speaker and musician to the world fair for classical music „classical:next“, to the Bundestag in Berlin and to the World Food Forum of the United Nations in Rome. 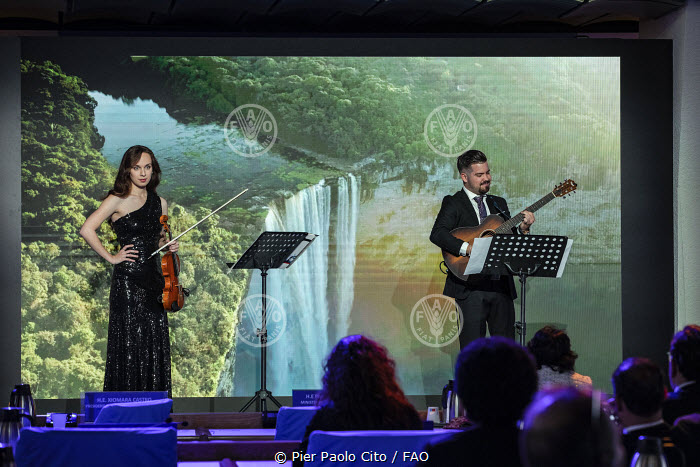